These WiFi-enabled trail cameras can be used in a wide variety of situations. One thing that they excel at is being put in locations that aren’t easily accessible. Then using their WiFi connection you can change the camera’s settings as well as view or download pictures and videos from a distance. For example, if you wish to mount the camera in an elevated position you don’t need to use a ladder every time you want to access the camera, which would be a tremendous help.

One of these feature-laden, but yet affordable options is the Toguard H80 WiFi and Bluetooth enabled trail camera. 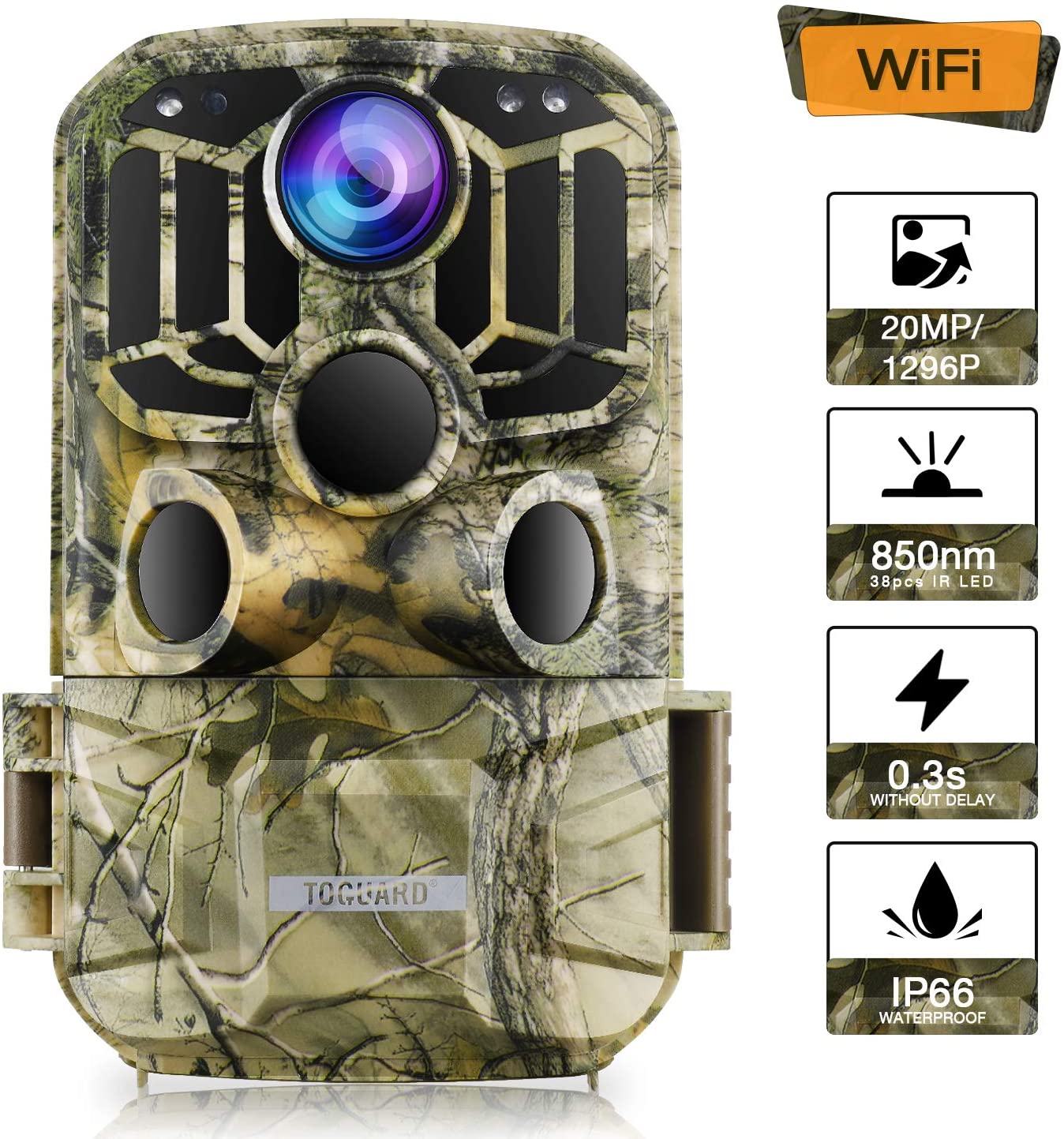 The Toguard H80 is a great piece of equipment to help ensure that your hunting season is a success. This trail camera is among the most technologically advanced in its class, with unique features such as Wi-Fi and Bluetooth connectivity. Coupled with a high-quality camera and several high end or customizable features, the H80 is a very versatile trail camera.

When you add in its smartphone app and smartly designed exterior case the H80 is more than just a bunch of great features. It is easy to use and set up as well.

Aside from monitoring game animals, you can also use the H80 trail camera for home surveillance to improve security around your property.

Review of Features and Benefits of the Toguard H80 Camera

One of the most impressive things about this Toguard model is the camera quality. The photos have a resolution of 20 megapixels, while it has 1296p Super HD video resolution. This is top quality, where you have the assurance of clarity on your recordings.

Additionally, it also features a photo+video mode, where it takes a photo then records a video.

A huge selling point of the H80 is the built-in WiFi and Bluetooth connectivity and the free smartphone app, Hunting Camera Pro, which is available for both IOS and Android devices.

The reason why the WiFi isn’t continually on is that it would drain the battery rather quickly, which is why Campark has you go through the process of using Bluetooth to turn the wifi on and off as needed. Having the Bluetooth always be available is less of a drain on the battery than having the WiFi constantly turned on.

Not only do cellular trail cameras cost more than wireless trail cameras, like the H80, but they also need a data plan from a cellular service provider (like AT&T & Verizon), which is another expense you need to consider.

No. It doesn’t connect to wireless networks or access the internet. Instead of connecting to an existing WiFi network, the Toguard H80 creates its own WiFi signal that other devices can use to connect to the camera.

The motion sensor is a vital component of all trail cameras, as it detects motion and triggers the camera to start shooting. The H80 has three PIR sensors, one centrally located and two on either side. The sensors have a combined 120° detection angle and a range of 65-feet, which gives the H80 a large coverage area.

The motion sensors on the H80 have adjustable PIR sensitivity with High/Medium/Low settings. The High setting is geared for areas with little interference that would cause false triggers. The Low setting for areas with a lot of tall grass or branches that easily move in the wind. The medium setting is for more normal conditions that are between the High and Low settings. If you want to learn what you can do to minimize false triggers with the Toguard H80 or any other trail camera click here.

When talking about the motion sensor, you cannot overlook the trigger speed, which is the rate at which the sensors trigger the camera to start recording. With its fast 0.3 second trigger speed, the H80 has an advantage over many other trail cameras.

With the combination of a wide detection angle and a fast trigger speed the H80 tries to make sure that no important moments will pass by the lens without being captured.

The Toguard H80 has a low glow flash with 38, 850nm LEDs. The flash has a range of 65 feet, and while the low glow won’t scare away game animals the front of the camera does glow red while the flash is in use (the same as it does on all other trail cameras that use low glow flash).

It has three settings; economy, auto, and superfine. The economy mode will save on the LED lights’ battery, though the pictures taken might be of low quality. The superfine mode takes high-quality images, but it consumes a lot of power. The auto setting works as a balance between the economy and superfine modes.

The Toguard H80’s time-lapse feature comes to your aid when you want to monitor an area that is beyond the range of the PIR sensors.

The time-lapse feature can also be helpful If you have your camera set up in an area where it is experiencing a lot of false triggers (and turning the two side sensors off doesn’t seem to help). Click here if you want to learn some tips about how to prevent your trail cameras from having false triggers.

Please note that when you enable the time-lapse mode, the motion sensor will be turned off, and the camera will only be activated at the predetermined time intervals that you selected.

This Toguard model features a 2-inch color TFT LCD screen, where you can view your photos and videos and make changes to the camera’s settings. However, after you initially get the camera set up the LCD screen won’t be as important to you since you will be able to view photos and videos as well as change the H80’s settings remotely using your smartphone.

To complement the LCD screen, the exterior case is designed differently than a lot of trail cameras out there. Instead of having a case where the whole front swings open (including the camera), only the lower portion of the case opens up on the Toguard H80 exposing the LCD screen and menu control buttons.

This is a helpful feature because it allows the camera to stay in position when the case is open, which is helpful because it allows you to see exactly what the camera is viewing as you are setting it up in the field. This means that you can minimize the amount of time it takes to set up the camera because you won’t have to shut the case, let the camera take a picture, check the picture, and potentially go through the process multiple times if the camera isn’t pointed in the direction you want. The H80 can support SDHC memory cards with a storage capacity of up to 32GB. Toguard recommends class 10 cards. We suggest using the SanDisk 32GB Ultra SDHC memory card. As with all trail cameras, remember to format the memory card before using it for the first time.

You can prevent strangers from accessing and using the Toguard H80 by using its password protection feature. To access this feature go into the camera’s settings and until you find the password feature. Once you turn the feature on you will be prompted to create a password of your choosing. After setting it up anytime you turn on the camera, you will need to key in the password before you can use it.

To power the H80 you will need 8 AA batteries. The H80 is economical on battery use and can last up to 6 months on one set of batteries. However, depending on the batteries you choose, the settings you select, and the amount of activity the camera captures battery life can vary-especially in cold temperatures. For best performance and maximum battery life we recommend using Energizer Ultimate Lithium batteries.

Image stamps show key details about when photos or videos were captured. The image stamp is very helpful when you are sorting through or studying pictures and videos of game animals as you look for patterns of behavior with certain environmental conditions. The information included on the H80’s image stamp includes the date, time, temperature, moon phase, and camera name.

The following accessories are included with the camera.

In addition to hunting, you could also use the H80 to monitor your property. That said, if you do choose to use this camera for security purposes you want to remember that the LEDs will glow red on the front of the camera when the flash is in use.

If you need the camera to remain undetectable at night you probably want to consider a trail camera model that has no glow flash. This is not only true for security applications but also if you plan on using the camera on public hunting land where people might be able to see the flash when it is in use at night.

The Toguard H80 is decently priced when you look at the features it sports. When compared to similarly equipped trail cameras it is clear that the H80 is very affordable for a trail camera of its class.

If you like the Toguard H80 you will probably be a fan of the Campark T80 as well. The Campark has virtually the same features and specs as the H80 with three exceptions;

If you like both cameras you might end up making your final decision by comparing the prices and seeing if one of them happens to be on sale. You can see the current price of the Campark T80 here. 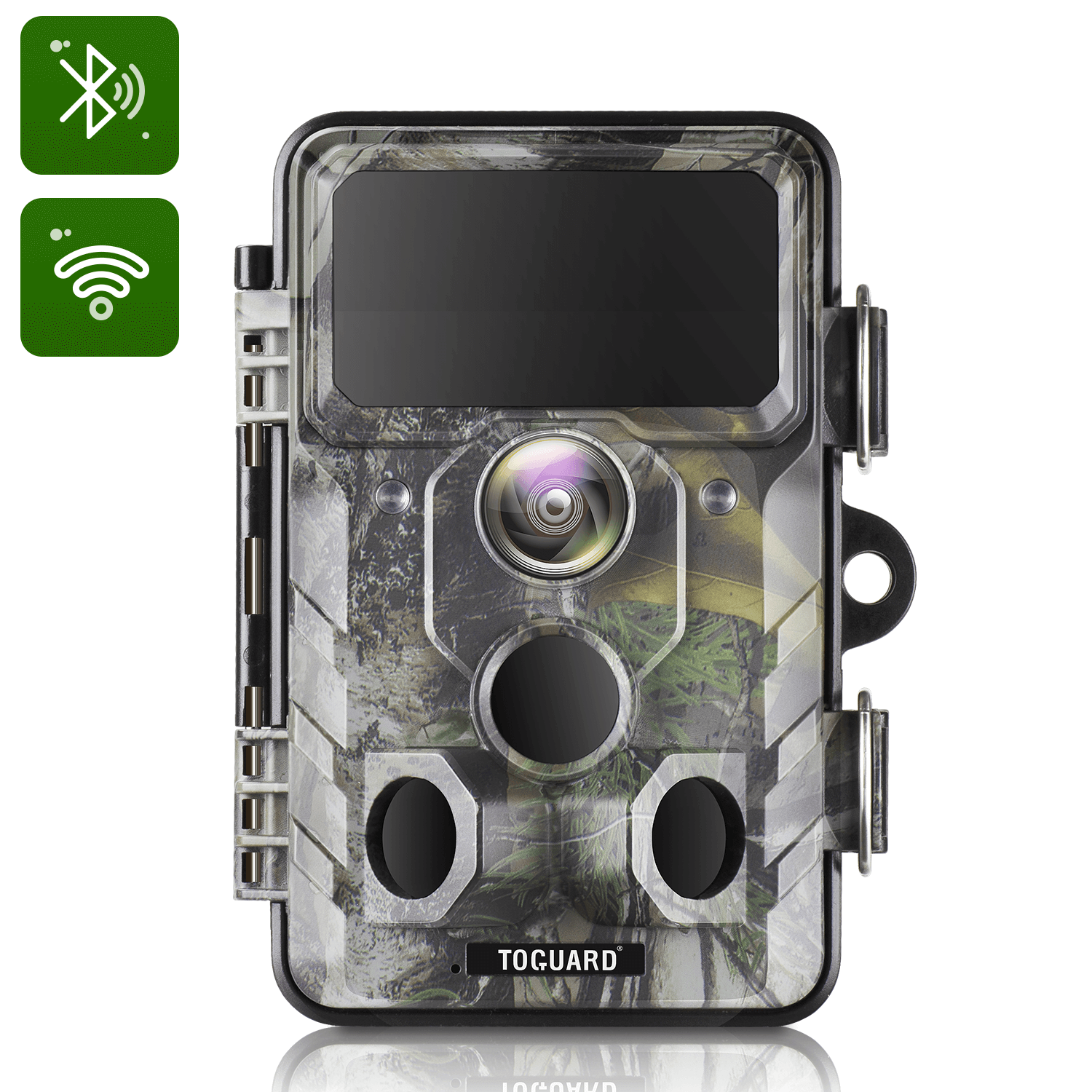 The features on the Toguard H85 trail camera are almost identical to the H80 with the exception of just a few things, with some of them being very minor differences. These differences are:

You can check the current price of the H85 here.

The Toguard H80 with its WiFi connectivity, 3 PIR sensors, and adjustable settings is a very versatile camera. Between its free smartphone app and smartly designed exterior case, it is very easy to use and set up. Overall, the H80 is a great value for the money.