When using trail cameras to capture pictures and videos at night there can be lots of situations where you worry about the camera’s flash spooking animals or alerting people to the camera’s location. Let’s face it sometimes you just need a trail camera with no glow flash.

Unfortunately, trail cameras with no glow flash are significantly more than their low glow counterparts and often come with a bunch of features that you might not need like wireless or cellular connectivity, which only further drives up the price. 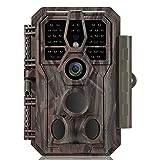 That is why we are so excited about theGardePro E5. It is one of the few super affordable no glow trail cameras, but don’t let its affordability fool you. This is not some stripped-down trail camera that was given no glow flash. While it doesn’t have wireless or cellular capabilities, which most of us are fine without, it is a full-featured camera with some top-notch specs. 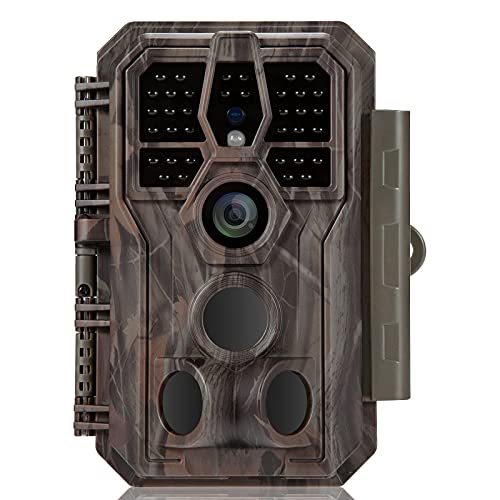 The GardePro E5 trail camera is designed for people who want to capture great pictures and video of deer, trespassers, or anything else, but don’t want the flash to spook animals or give away the camera’s location. With a fantastic price and a strong list of features, it is an exceptional value.

One of the best things about the E5 trail camera is it’s high image quality. It has a resolution of 24-megapixels for photos and records 1296p Super HD videos with audio. You can select the 1296p quality at 20 frames per second or 1080p @ 30 frames per second for faster-moving action. If you want to learn more about which frame rate might be best for your situation you can read our article, What Frame Rate Should Your Camera Have?

In addition to the traditional picture or video modes the E5 also has the photo+video mode, where it takes a photo before recording a video. This feature will boost the diversity of your recordings and is something we look for in cameras these days.

The one thing we wished the E5’s camera lens had was a wider field of view which is at 70°. That said, a 70° field of view will suit most people just fine so this should not be a deal-breaker. To be fair we are just getting greedy here since we know that other GardePro cameras like the E6 have a 110° FOV, but it doesn’t have some of the higher-end specs of the E5 and is also more expensive.

The motion sensor senses disturbances within the detection zone and triggers the camera to start recording. The GardePro E5 has 3 motion sensors, one in the center and one on each side. The central one has a 60-degree detection angle, while the side sensors cover 30-degrees. This gives the camera a total detection angle of 120°. It also has adjustable PIR (motion sensor) sensitivity with high, medium, and low settings.

In cases where you are experiencing a lot of false triggers, you have the option to turn off the side sensors. The camera has a detection range of 90-feet.

Another impressive thing about this GardePro trail camera is its fast trigger speed of 0.1 seconds. This is an ultra-fast rate, considering that most trail cameras have trigger speeds of around 0.5 seconds.

The E5 can take excellent night shots courtesy of its 36pc 940nm no-glow infrared LEDs. flash with a 100-foot range. Knowing that the camera has a no glow flash allows you to rest assured that the camera won’t spook animals or give away its location at night when the flash is in use.

The 100-foot range is among the longest, as the standard trail camera has a range of around 65-feet.

This trail camera has dimensions of 5.6 x 4.2 x 2.86 inches, which is similar to most other cameras with features that are comparable to the E5. While it isn’t considered a mini trail camera it is still pretty compact and convenient to use in a wide variety of locations.

The GardePro E5 trail camera is equipped with a time-lapse feature. This function comes in handy if the camera is in a place where it is receiving false triggers. It also is helpful if you want to monitor the area that is beyond the range of the motion sensor or want to document slow-moving natural events. When turned on, the motion sensors will be deactivated and the camera will only take photos at the time intervals you select.

The E5 also has an Hours of Operation Timer function, which when enabled will allow you to specify a specific time period each day when the camera will be in operation. This is a good feature that will save the camera’s battery life and conserve storage space on the memory card.

When you open the camera’s cover you will be able to access the 2.4-inch color LCD screen, which will allow you to preview the pictures and videos the camera has captured as well as help you to adjust the E5’s settings. As with all trail cameras, you will need a memory card to store the captured photos and videos. The GardePro E5 works with SD, SDHC, and SDXC memory cards with a capacity of up to 256GB. Class 10 memory cards are recommended. If you plan on leaving the camera unattended for extended periods, especially if it is in a very busy location where you are taking a ton of videos, the SanDisk Extreme Pro 256GB SDHC memory card a great choice. Otherwise, we recommend the 32GB SanDisk Ultra SDHC memory card, which is a nice compromise between price and storage capacity that will work well for the vast majority of users.

The E5 has the Loop Recording feature, which when enabled will allow old files to get overwritten by newer ones to create more space should the memory card become full. Other cameras that don’t have this feature will simply stop taking pictures and videos once the memory card runs out of storage space.

You can set a password on the camera to restrict its use by other parties. To encrypt the camera, go to settings and create a 4-digit password of your choosing. You will then have to key in the password each time you want to access the camera’s settings. Remember that if you don’t need the camera to be active 24 hours a day you can also turn on the Hours of Operation Timer that we mentioned earlier to increase the batteries’ service time.

You can also use an external power source to power this GardePro trail camera. It works with a 12V/1A power supply unit, with a plug measuring 5.5 x 2.1mm.

The image stamp feature shows you the details of the recordings like time, date, temperature, moon phase, and camera name. This feature comes to your aid as you sort through your video footage and pictures. We love using the information on image stamps as we look for patterns of behavior in deer, or other game animals, as it relates to temperature, moon phase, or other variables.

This GardePro model is a very versatile trail camera that you can feel confident using in many areas and for a variety of purposes. The E5’s long detection and flash ranges allow it to do things that some other cameras can’t. With its no glow flash you can use the E5 in places like public hunting land or for purposes like property surveillance where you need the camera to remain undetectable at night.

Thanks to its high-resolution camera and features such as time-lapse mode this GardePro is also a good option for nature photography.

Price is a factor that most people look at before purchasing a trail camera and price is another area where the GardePro E5 stands out. It is hard to find a no glow trail camera with comparable features that has a more competitive price.

If you really like the GardePro E5, but wish it had wireless connectivity you might want to take a look at the Campark T85 no glow trail camera. For just a few dollars more you get a no glow trail camera that you can mount in harder-to-reach areas while you easily check it from a distance using the T85’s WiFi signal and the free app for your smartphone. That said, by going with the Campark T85 you will be missing out on the E5’s longer flash and detection ranges as well as its slightly faster trigger speed.

We did a review on the T85 previously if you want to read more about it. Otherwise, you can see its current price here. Usually priced just a few dollars less than the E5, the no glow No products found. is another excellent option to consider. Other than having a slightly narrower field of view and capturing 20MP images and 1080p videos as compared to the 24MP pictures and 1296p videos found on the E5, the GardePro A3 is almost a twin of the E5.

We previously did a full review of the A3 and really liked it. So if you want to see if you can save a few dollars you might want to check out the current price of the A3 No products found..

Available with a camo or brown exterior GardePro’s E5 finds the sweet spot between performance and value in this full-featured no glow trail camera. Whether you want to buy one or several no glow trail cameras, the E5 is a model you should seriously consider. You can check its current price here.